Our Scheme Rules set out the framework for how we resolve complaints between authorised persons and complainants. They are broken down into six sections as follows:

Chapter 2 –Who can complain about what

Chapter 3 –What authorised persons must do

Chapter 4 –When complaints can be referred to us

Chapter 5 –How we deal with complaints

This guide intends to address some of the frequently asked questions we receive from lawyers around how we apply the rules, illustrated by some case studies.

Chapter 2: Who can complain about what?

1. Do you accept complaints from beneficiaries?

There are two general categories into which these complaints fall:

a. The beneficiary tells us something went wrong with the service provided to someone who has now died

These fall within our jurisdiction under Scheme Rule 2.1(f) but subject to two conditions set out immediately beneath the rule: the complaint has to relate to services provided to someone who has since died; and that person had not made a complaint to our office before they died.

b.The complaint relates to the service an authorised person is providing or has provided to the estate

2. Do you accept complaints from non-clients?

Yes. We often receive jurisdiction challenges from lawyers who state the person complaining was not their client.

In relation to Scheme Rule 2.8(a), this means if the complainant is receiving the benefit of a service, even if they did not directly instruct the lawyer or pay their fees, they fall within our jurisdiction.

In relation to Scheme Rule 2.8(d), we will expect the complainant to provide evidence to show the refusal to provide a service was unreasonable before we accept the complaint for investigation.

3. How do you determine when one firm is a successor to another?

Our approach is set out under Scheme Rule 2.10 and says:

Where firm B accepts they have succeeded to firm A and are responsible for acts/omissions and complaints about that firm, then we will automatically treat them as a successor. However, if firm B were to dispute they were a successor to firm A or if they claimed it would be unfair to hold them responsible for the acts/omissions and complaints of firm A, a formal decision would be made by an ombudsman using the‘fair and reasonable’ test set out under Scheme Rule 2.10.

Chapter 3: What authorised persons must do

4.What does a good first tier complaint response look like?

Complaints provide an opportunity for lawyers to listen and learn from their clients about ways in which they can improve their service. Managing them effectively can prevent a complaint from escalating further and restore the client’s confidence. Furthermore, it could mean the difference between a case fee being charged or waived, should the Legal Ombudsman become involved, or result in a referral to the regulator if not handled reasonably.

In order to assist lawyers we have published a Guide to good complaint handling and Top tips for responding to a complaint. These guides set out what we expect to see and offer practical advice on how to handle complaints appropriately.

Chapter 4: When complaints can be referred to us

5. Can a complainant refer their complaint to LeO if they have not yet exhausted our internal complaints process?

So, for example, if a firm’s internal complaints process has three stages, and only the first two have been exhausted within the eight week period, the complainant is still able to refer the complaint to us if they wish to do so, and they do not have to go on to stage three.

Depending on the circumstances, we may encourage the parties to continue liaising with each other directly after eight weeks have elapsed, such as where it seems they are very close to a resolution, or where we feel the complainant has not fully co-operated with the firm.

However, in exceptional circumstances (or where the relationship between the parties has broken down to such an extent that they are unlikely to come to a resolution), Scheme Rule 4.2(b) and (c) also gives us the discretion to accept a complaint sooner than eight weeks or without it having been raised with the firm at all.

6. What are your time limits for accepting complaints?

The time limits within which complaints should be raised with our office are set out under Scheme Rules 4.4 and 4.5. Scheme Rule 4.7 also allows an ombudsman to extend any of these timescales if there are exceptional circumstances.

The following case study illustrates how this rule is applied:

The following flow chart will assist you in determining whether a complaint meets these timescales:

Screenshot of a flow chart about complaints timescales

Chapter 5: How we deal with complaints

7. Can lawyers challenge jurisdiction to investigate a complaint?

Yes, under Scheme Rule 5.4 which says:

This means an authorised person can challenge our jurisdiction if they believe:

- the person raising the complaint does not have standing to do so under Scheme Rules 2.1 and 2.8;

- that they have referred the complaint to us outside of the time limits set out under Scheme Rules 4.4 and 4.5;or

- they believe the complaint should be dismissed for any of the reasons set out under Scheme Rule 5.7 (e.g. they feel it would be better dealt with by a court).

8. How do you determine a complaint if there is little to no evidence available?

In our factsheet Investigating complaints – information for service providers we explain that we will ask for evidence from both parties to support their version of events. Where a firm has closed or been intervened into, this may involve contacting former partners, an intervention agent or liquidators to gather the information we need.

While most of the evidence we require will come directly from the parties there will be occasions when we contact third parties. For example, in some cases we have taken into account information we have obtained directly from the Legal Aid Agency, the Home Office and the Land Registry.

However, documentary evidence is not always available, especially where the events took place more than six years ago and the lawyer has destroyed their file. Where possible, we will weigh up both parties’ versions of events and make a decision based on what we consider is more likely than not to have happened. If there is insufficient information for us to reach a fair conclusion, we may dismiss the complaint under Scheme Rule 5.7.

Where a party does not co-operate with our investigation or provide the information or evidence we ask for, we are able to draw inferences (Scheme Rule 5.24(g)) and make a decision on the basis of what has been supplied (Scheme Rule 5.24(f)).

9. How do you define reasonable service?

Scheme Rule 5.36 says that a complaint is to be determined “by reference to what is, in the opinion of the ombudsman making the determination, fair and reasonable in all the circumstances of the case”.

What is fair and reasonable isn’t defined in either the Legal Services Act2007or our Scheme Rules. While it is understandable that lawyers want a definitive line between what is reasonable and what is not, it really does come down to the individual circumstances of the case.

However, in order to assist lawyers and provide further clarity on this point, we have published guidance which sets out some of the factors we take into account when making our decision, along with some case studies.

10. How do you decide on a fair and reasonable remedy?

Our starting point for deciding on a fair and reasonable remedy is to try and put the complainant in the position they would have been in had the service been reasonable.

We have published a guidance note called Our approach to putting things right, which sets out the process we follow when deciding whether or not to award a remedy and the different types of remedy we can award. This also includes a useful table which sets out the factors we take into account when deciding how much compensation to award for distress and inconvenience.

11. Do you have any discretion to waive the case fee?

If a complaint is closed as ‘out of time’ or ‘out of jurisdiction’, or if it is dismissed under Scheme Rule 5.7, the case fee won’t be charged.

However, for all other cases that are accepted for investigation, we receive lots of questions about the circumstances in which the case fee can be waived. For example, we are commonly asked whether the case fee can be waived if we only uphold some of the complaints but not all of them, if we find the service provided was reasonable, or if the authorised person fully engaged with us. However, there is no discretion within the Scheme Rules for us to waive the case fee for any of these reasons.

For the cases, the case fee will apply unless both parts a) and b)of the two-part test (set out under Scheme Rule 6.2) are met.

The following flow chart will help you to determine how those tests are applied: 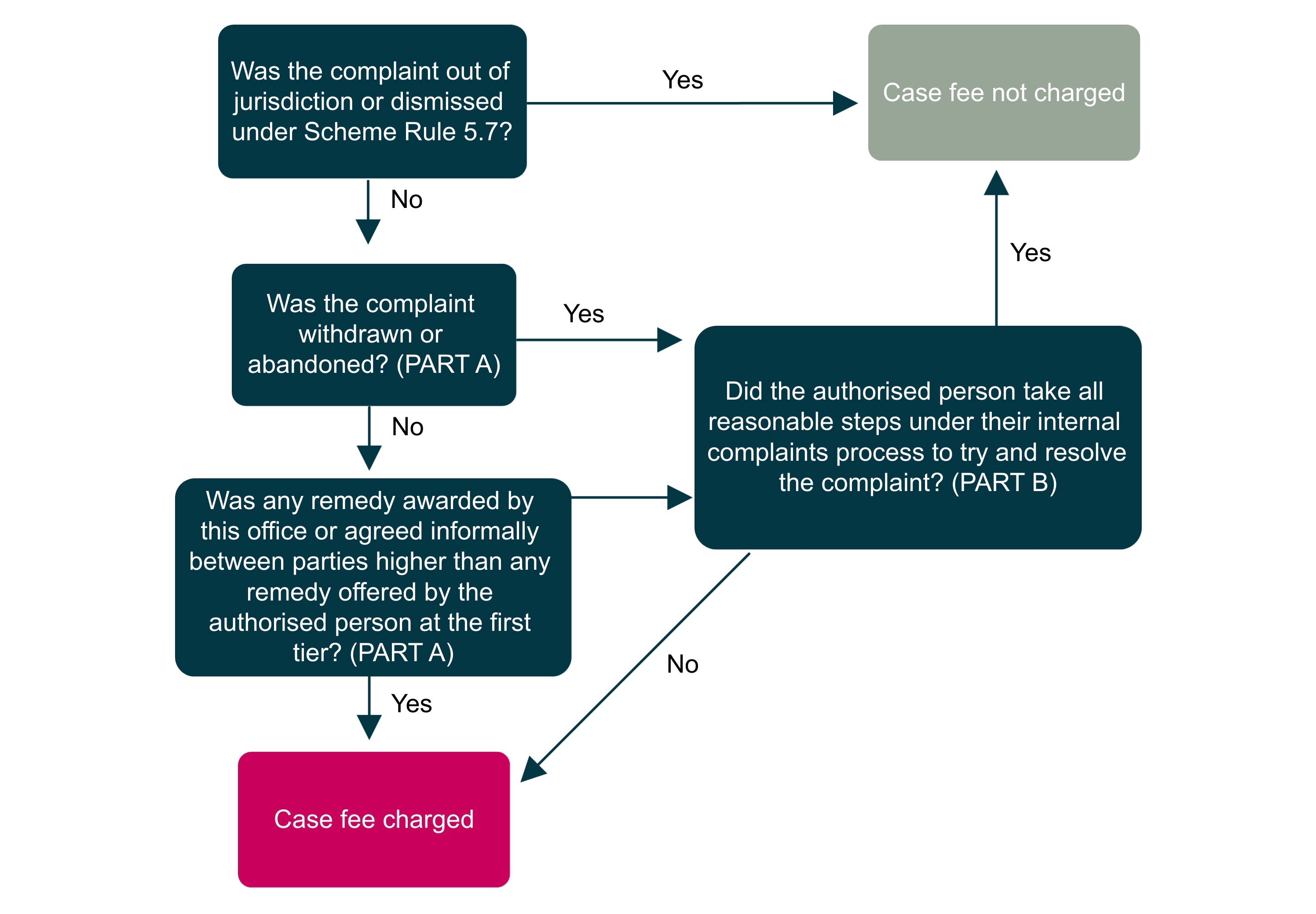 In reaching a view on Part B of the test (Scheme Rule 6.2(b)) of the test, we will generally expect to see:

12. Do you ever charge a complainant for bringing a complaint that is not upheld or is vexatious?

As set out under Scheme Rule 6.6, complainants are not charged for using our service, even if their complaint is dismissed or not upheld.